Every day was a record breaking day for us and we saw regular customers coming several times a week, bringing new friends each time. It was the perfect launch. 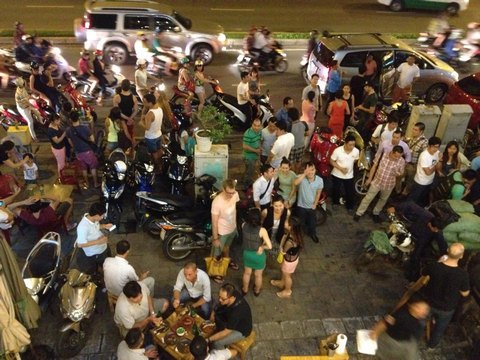 It was within a few weeks of opening that we got our first published reviews in the local media. Word of mouth had been spreading like wildfire and already our nightly covers far exceeded our expectations. Every day was a record breaking day for us and we saw regular customers coming several times a week, bringing new friends each time. It was the perfect launch. We had to close for a few days to finish our renovations and install the bar but soon reopened to a crowd of excited meat lovers.

Whenever time we caught up with the supply of BBQ, the demand shot up even more. We outgrew outfirst smoker almost immediately and had to build a second one. We added in two more grills and three Webers. Vietnam’s craving for American BBQ seemed insatiable. And then VTV did a piece on us. Overnight we went from 100 customers a day to 400. It was insane.

We stood in the street and tried to keep the traffic flowing while we explained to customers they’d have to wait 90 minutes for a table. To most it was incomprehensible. Even to us it was. There was something about giant sausages and racks of ribs that had gripped the city in a frenzy of excitement. At times we would have more than a hundred guests hungrily waiting on the pavement for a table to free up, all watching the BBQ and being tortured by the sight and smell of ribs being hurried back and forth from the grill.

We adopted an organic approach to marketing. We avoided spam and advertising, and preferred our product do the talking. It seemed to work. The unconventional became our playground and we rejoiced in freedom of expression and pushing the envelope. The only rule was there were no rules. We spent our fair share of time explaining the meaning of our chalkboard signs to curious customers and were constantly asked when we were expanding or opening new locations.

Time flew. We expanded upstairs to accommodate the long lines and got the waiting times down to a manageable level. But it wasn’t enough. We needed a new location. Finding it would be tough, but we went on the hunt. Across the city we traveled, down narrow alleys and along busy highways. The perfect spot was elusive and always one step away from us. At time we thought we had found it. But TIV. Unsafe foundations. Outrageous rent. Sneaky landlords. It seemed the perfect second location was our white whale. An impossible find in the urban sprawl of Ho Chi Minh City.

Persistence, however, paid off. The keys for our second location were handed over last week. It is real. It is huge. And it’s coming soon.

Thank you all for the amazing support in getting us off to a flying start. BBQ lovers of Vietnam: it’s time to kick it up a notch!